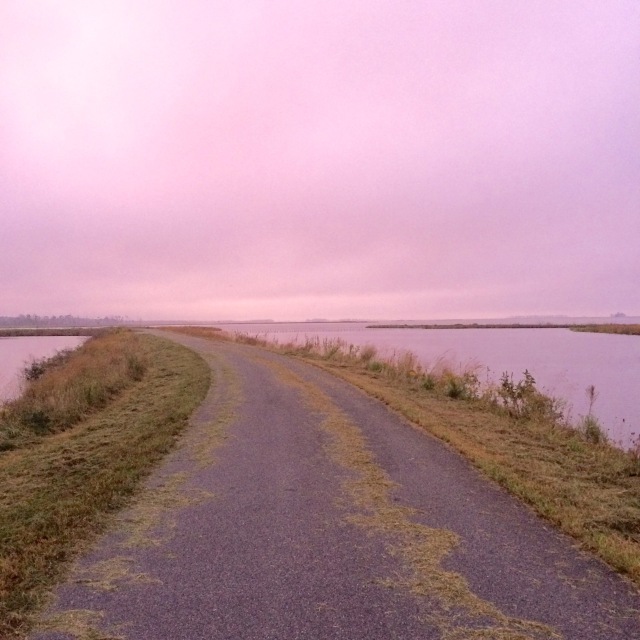 No really… Take them. Sharing is caring, right? A few weeks ago I wrote about a handful of awesome trails within striking distance to my home in The Greater Salisbury Area of Delmarva, but as I drive around I continue to see runners hitting the ashphalt. Runners love the smell of ashphalt in the morning. They love to wake up, walk outside and start clicking off miles. Unfortunately some those miles are ugly, boring or downright dangerous.

So even though I feel like I am cheating on my beautiful trails, I present to you today in this blog… Trent’s Best of Salisbury and Beyond Running Routes. These routes are chosen because they are safe (limited, if any, traffic and often well lit), interesting (not just block after block of houses), and not too ugly (yes, I avoided the roads around the landfill and in front of the chicken plants). My running club and I have run all these routes numerous times at every conceivable time of the day and night, so take notes and join us on these roads (if we aren’t on the trails) Best beginner route! We are lucky to have a beautiful university campus in town that includes a tunnel under route 13. The campus is hardly ever crowded and hardly ever empty, which is perfect for a safe, pleasant run. If you run around the campus and under the tunnel you can run over three miles without crossing a major road. To increase miles take Camden Avenue towards downtown for an “out and back” route.

No other route says “Salisbury” like this beauty. You are able to see the park, the zoo, and some wonderful Delmarva landscape. There are a few busy roads to cross, but mostly the roads are country and quite empty. If you run this early in the morning the sunrise over the fields are breathtaking. There is a nice quant lake by Hinman lane that is often visited by fishermen and if you can catch it on a foggy morning it is a sight to see. Where you start and end this route there is a small hill on both sides of the playground if you want to add in some hill work. Add… Check out one of the best small zoos in the country before or after your run! 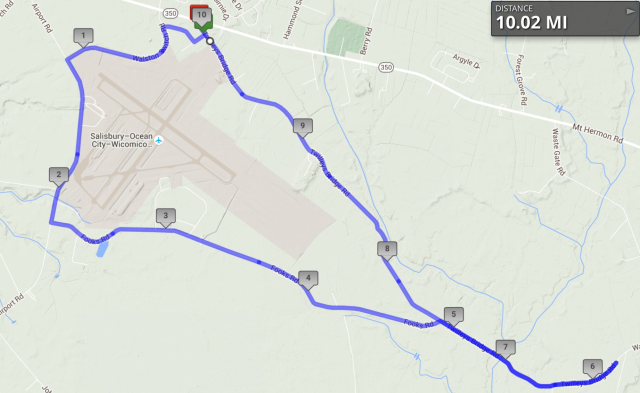 A few of the best dirt roads on Delmarva are found on Fooks road and Twilley’s Bridge road. If you run far enough on Twilley’s Bridge road you will find…. Yes a bridge. This route has two parts: heavy traffic near the airport and almost nonexistent traffic everywhere else. So be careful during the first two miles. The roads can get quite muddy or quite rocky depending on when the country last covered the roads with rocks. Great route on a hot sunny day since the tree cover most of the route. This is The Pemberton Running Club’s half marathon route. It is fast, flat and besides the two crossings of Nanticoke road and the stretch along Pemberton drive it is very safe. The country roads are great for getting in a rhythm and completing a nice long run. Continue on to Hebron to make the run longer. Bring lots of water during the summer along this route because there is a few few shaded areas. Make this one fast. 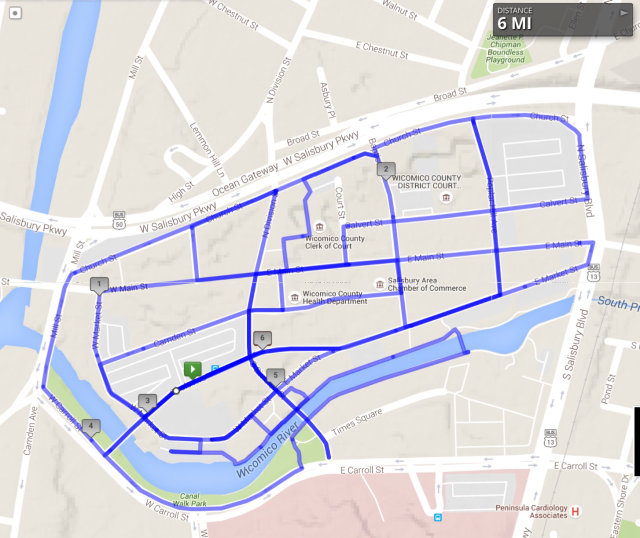 This is a route I would recommend during the day. You can add as many miles as you would like by continuing to run the roads in different directions. Although it is downtown, traffic is usually light and there are sidewalks everywhere. Around the courthouse there are small hills and if you want to add a little more hill work go across route 50 to Lemon Hill Road. Run Lemon Hill five or six times and your legs will hate you. You could also run in the parking garage across from the library, but I’d be cautious of running this area after dark. 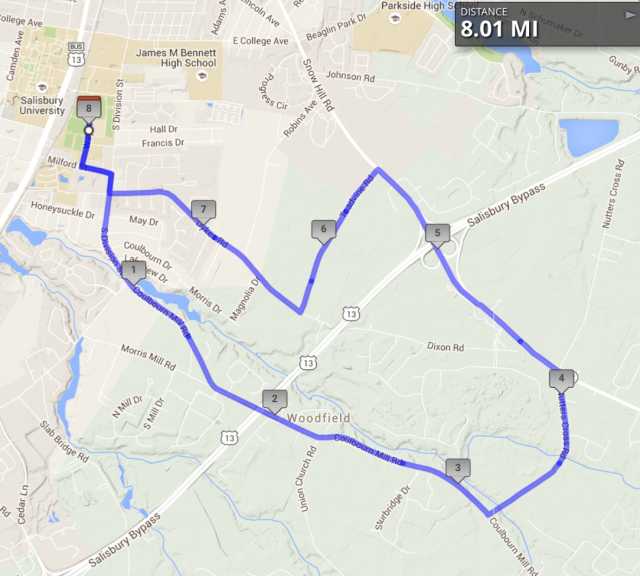 Toadvine on a clear night with a full moon is a must run street in Salisbury. This route is close enough to the city, but country enough to make you feel far away. Start on Wayne street and for an extra bonus add the parking garage before or after the loop. The roads have little traffic, but the traffic that does drive this route can drive fast so run off road when needed. An extra treat is the Royal Farms convient store less than a mile from the start to quench your thirst after the run. 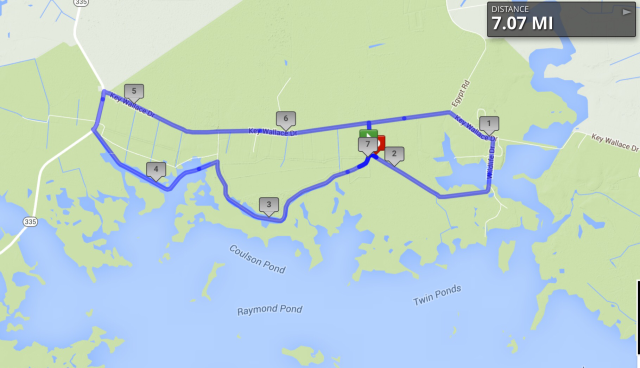 Mark my words… You will never run a more scenic route on Delmarva. NEVER. This screams DELMARVA. This is The Blackwater wildlife loop and it will not short change you in regards to wild life. There is not a bad time of the day to run this, but avoid this during the summer or the bugs will eat you alive. Bring your camera and forget your pace on this run. If you haven’t run this do it now before May and let me know what you think.

Dawn owns this route. She is one of my Deal Island friends and she will run just the bridge portion of this route over and over and over again. One day I hope to dethrone her by running a half marathon distance back and forth over the bridge. Great hill workout for our area and the marshland surrounding the area is epic to see and experience. You can avoid the greenhead flies during the summer if you stay on the main road AND if you are lucky. If you want to experience the entire Deal Island running experience, sign up for The Skipjack 5k or 10k. There is an even better route out on Deal Island that is currently closed that we called the Riley Roberts loop… If that opens back up I’ll be back to Deal Island weekly (so Dawn and Josie… Can you fix that. Smiles) 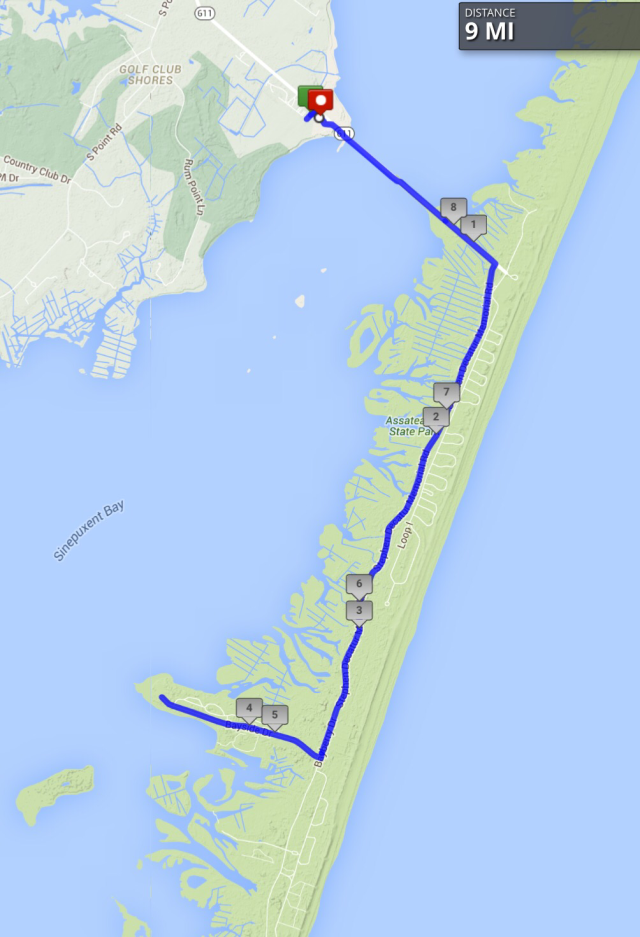 As beach bum growing up I have a biased view of this route and this run. You run over the Verrazano bridge and on to Assateague. The bridge will give you a great view of The entire island as well as Ocean City to the north. Be ready to see tons of wildlife including birds and wild horses. This run is excellent in the summer, winter and everything in between. For a more difficult challenge run the return in the sand near the water. The best time of the day to run this is obvious… Early in the morning to catch the sunrise over the ocean. For a fun challenge, Sign up for the two islands half marathon and run from Assateague to Ocean City, but that is not until April. Until then get out and run this route and don’t be surprised if you run back holding a few treasured shells.

10. “The Dude” by guest writer Chris Demone, The Master Route Builder of The Dude (4 miles)

“The Dude” is just a little over 4 miles of pretty neighborhood streets in the Camden district. There are plenty of trees and very little traffic, but there’s not much else remarkable about this route. That is, until you look at the map. Thanks to the unique layout of the streets in the neighborhood, this route ends up looking like a big-headed guy running; thus the name. Park next to Woodcock Playground on Riverside Rd., and start from the corner of Riverside Rd. and South Blvd. The final stretch coming up Riverside Rd. makes for a nice flat-out sprint on a slight uphill grade. The Dude abides…

I’ll see you all on the roads (or trails) of Delmarva!