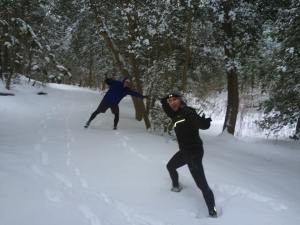 Every year I look forward to the forecast that calls for snow… lots of snow. Last week was already the middle of February and so I was thinking maybe we missed out this year. Maybe we wouldn’t be able to get in a snow run. I was bummed.

The truth is I love cold weather running and I love nothing more than a nice early morning snow run. Last Monday night I was glued to the weather app on my phone and constantly checked the local TV station’s website. I was itching for lots of snow and they were calling for six to ten inches of snow, which is really quite unusual for The Eastern Shore of Maryland. My wife grew up in Montreal, Canada and has had a lot of experience in handling snow, so when she told me to get shoveling at 11pm with snow still falling and only three inches on the ground I did just that. I cleared the driveway and received a few odd looks from the neighbors… like “What the heck are you doing… it is still snowing”…

I am glad I shoveled. Tuesday morning I woke up like a kid on Christmas and jumped to the window…. and there were an additional three or four inches on the ground. Any additional snow and I would have had some difficulty getting out of my driveway.  I could easily drive over three inches of snow and so I backed up and began driving towards the downtown park and zoo area of Salisbury.

The route to the zoo became an obstacle course as plows piled up snow blocking half the streets as they cleared the other half. A drive that normally takes me ten minutes took me over thirty minutes and when I finally arrived at the zoo I realized there was nowhere to park. The parking lot at the zoo was covered in six inches of snow. My friend, Brian, called and said he was stuck for a while in his driveway, but was on his way to run with me. My other friend, Melissa, was running from her house to the zoo. Brian and I agreed to meet about half a mile from the zoo in a shopping center was plowed out.

With watches fired up and my yaktraxs secured to my shoes we ventured off. The first part was a fairly easy run along the road toward the zoo. The snow was still fresh and fluffy and so to keep us moving along quickly we kept to the tracks made by the vehicles. When temperatures drop under around thirty degrees iPhones cease to operate, so both Brian and I left our phones in the cars… Which meant I had to message Melissa before we left.

We passed the zoo and saw no sign of Melissa so we pass the south end of the park and made a loop around the zoo. Of course Melissa was making the same loop around the other side. Luckily for us her footprints and those of her dog Holly made them easy to track. Brain went around one end and I went along the other end and we both found her near the entrance to the zoo.

The three of us high stepped through the snow and kept our route nearly completely along the paths around the park. The snow was pure and untouched. We were the first to experience the beauty of the snow as it blanketed the park. The snow began to feel heavier as we logged mile after mile. Each step become a little more taxing and the cold began to make my hands cold and tingly. The snow had a very similar feel as the soft sand of the beach. As we ran, we pass several people shoveling their snow and giving us looks like…. “Are you all crazy?” We also saw a few cars braving the conditions, but luckily no accidents where we ran. The pace was slow, but the effort was intense. Towards the end of our run we decided to run the trails for about a mile. The snow on the trail was deeper and our feet sank with each step. It was awesome. Nothing beats a fresh snowfall to spice up a run.

Brian and I completed seven miles and Melissa finished with over ten miles as she helped push a few cars out of the snow on her way home.

The snow run was a success…. But my workout was just beginning as I pulled in the driveway and stared shoveling… and shoveling…and shoveling.