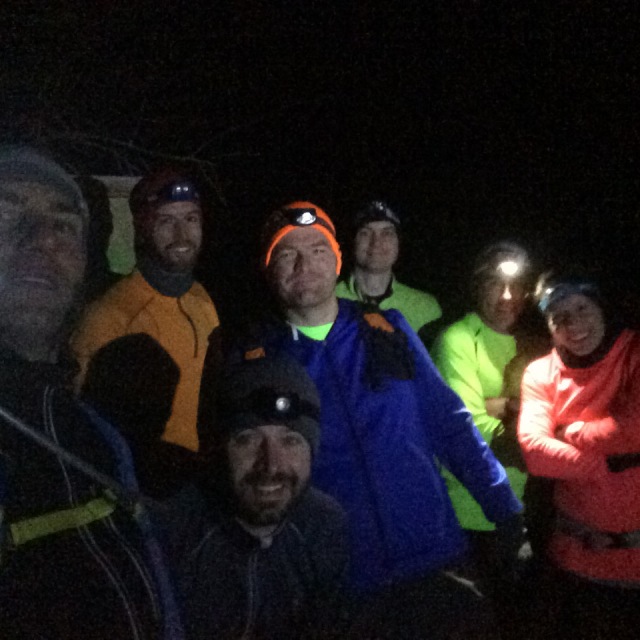 The longest trail on Maryland’s Eastern Shore had eluded me for far too long. It knew it was there and it knew I was anxious to conquer it…. But we never met until this past weekend. The annoyance and potential dangers of ticks, chiggers and mosquitos kept me away during the summer, so when an available Saturday opened up this winter I knew it was game on. I didn’t just want to run the trail, I wanted to run the length of the trail and then run back to the start.

The night before, while watching “The Making of a Murderer”, I packed my Orange Mud hydration vest with three packets of GU, two mini bagels, energy chomps and two bottles filled with water and Tailwind. I was preparing and planning for a self-supported 25 mile run on the soft dirt trails. The trails are fairly new and are relatively unknown. They were created for hikers, bikers and horseback riders, but this weekend the trail runners of Delmarva would own it… Well sorta, when we weren’t lost.

When I arrived at the north trailhead at a little after 5:30 in the morning there were five cars and seven runners waiting for me (Yeah I was late, It took a few extra minutes to scrape the frost off my car). It was an amazing collection of runners including a few guys who had run 50 and 100 mile races. It was a chilly 23 degrees when we began and after two days of rain and snow I thought a colder day would freeze the trail and make for an easier run. I was wrong.

After a quick, dark selfie, thanks to Gabe’s long arms, we were off and running. The proper-speed-pecking order usually doesn’t happen in the first mile or two, so I was lucky to be up front talking with The Swift Brothers Brian and Mark… Who happen to both be quite swift. Really. The conversation was flowing and we were laughing at each other’s running stories. Well… until we began to realize we hadn’t seen a trail marker for a while. Oh boy.

The Algonquin trail is marked every tenth of a mile througout the 12.5 mile trail. You would think after not seeing a trail marker beyond the third one we would turn around after a few tenths of a mile. We ran another mile and a half before deciding to turn around. I have no one to blame but myself considering I was in the front of the pack at this point. We turned around and realized that after only covering 1/3 of a mile of the actual trail we had already added an extra three miles to our trip.

No one was upset. Most were pretty excited that instead of 25 miles we were now going to go beyond a marathon. I was worried more about the time than the distance and the worry would increase in the next few miles….

Mile 2 of the actual trail was covering in water. I mean completely covered. At this point I was behind the actual group with one guy behind me. When I saw the trail buried in water and the majority of the group tiptoeing around the pool of water, I decided it was of no use trying to stay dry.

I saw Gabe on the other side of the water and I plowed through. My feet were soaked to the bone with blistering cold water. As my feet crushed through the thin ice and sank the six or seven inches to the bottom they numbed up… but I kept moving. On the other side all I could think of was moving. Moving. Moving. I had to somehow warm up my Klondike feet. I looked down and saw my shoes were icing over from the water. My feet warmed up pretty quickly until we turned the corner and there was another impossible-to-get-around flooded portion of the trail. Icy cold… Tingling… Numbing… And so much FUN. An adventure. We kept going until about mile 3.5 of the actual trail (6.5ish total).

On a random road that crossed the trail was Jay waiting near his truck. We were 40+ minutes later than he expected, but I am sure he enjoyed waiting around at six in the morning in the middle of the woods. We took a group picture and ventured on….

Melissa was our only female runner and she lead the way with both her speed and her toughness… A  little further down the trail we see Jeff Smith blazing up the trail from the opposite end. He started at the south end at five a.m. and ran to meet us. He must have been clipping off miles at an insane pace because he showed up less than a mile after we met up with Jay. The entire group was together. All ten of us headed south.

The mud, snowy patches and pools of water slowed us down, but the stories and company kept us moving. After about 8 miles in Chris and I began to lose sight of the group. We couldn’t even see Jim’s shoes (Altras with their footprint-looking bottom soles). The other runners were all much faster and we would have exhausted ourselves trying to keep up with their pace. It probably didn’t help that Chris and I ran into this…

We had no clue which way to go. So we went straight and ended up at a road with no further direction or trail markers. We quickly turned around and headed down the “closed” area of the trail. A mile into the closed portion of the trail we realized why it was closed. More swamp running. A half a mile worth of it.

When the swamp ended the muddy road began and there were very few stable places to throw down your feet. Slippery and sloshy we pressed forward until we ran into…. a beautiful, winding single track trail! Wow. The energy level skyrocketed. We were depleted physically, but alive with excitement from the newly found trail.

Fueled by the glorious trails we checked off mile after mile. Mile seven, mile eight, mile nine and mile ten.

Wait. There is Jeff’s car, but where is Jeff? It was mile ten of the trail, but mile 13 or 14 of our adventure. Chris had to get home and the trip down took much longer than expected. There were two more miles south and we had to believe that Jeff and the others were at the end or returning north.

After a mile and a half on the southern most end of the trail we ran into Gabe, Brian, Mark, Melissa, Jay, Jeff and Jim as they headed back north. Jeff was heading back to his car and said he would pick up Chris at the end.

I was in a dilemma. Should I run the 12.5 miles back to the start and be extremely late getting home, go back with Chris or call my wife from the trail and see if an extra hour could be added to my adult recess time? I made the phone call.

Green light! I running back I thought! Solo! I thought. Wow.

Chris and I arrived at the end of the trail and I was able to fill my water bottles. We had time to snap a picture before Jeff arrived. I wanted to sleep, I wanted to rest, I wanted to eat, but more importantly…. I wanted to run the entire trail back to the beginning!

A quick goodbye to Chris and Jeff and I was off.

It was tough. I dug deep. I dug real deep. The puddles were not as exciting running alone and felt more like annoying obstacles than Adventurous challenges. I kept telling myself to just keep moving. I kept saying to just “embrace the suck”.

Ken Chlouber, a Colorado miner and creator of the Leadville Trail 100 mile race once said “Make friends with pain, and you will never be alone.” Pain is a mean friend. Pain and I hung out for a few more hours as I endured and relentlessly carried on. I had plenty of water, enough fuel, and warm gloves and hat, but my legs were hurting. They felt like they were covered in thick metal. Heavy and difficult to move. It was wasn’t thick metal. It was thick mud.

Suddenly, I passed a hunter who had a decoy set up in the middle of the trail. He was trying to hunt crow. I didnt help his cause and he didn’t help mine as I feared hunters the rest of my journey. My orange hat came in handy!

“Let me get to the next mile marker,” I’d tell myself or “let’s make it to the muddy road” or “let’s just run until there is another puddle and then I can rest”… But you never truly rest. You kinda lie to yourself. It works. Self deception is a wonderful thing. I lied to myself until three miles to go when I hit a root… a huge root… and I went flying.

I landed on my side on the trail and I suddenly cramped up. The entire left leg cramped up. Okay I screamed a little. Maybe a lot. My leg was shaking. I had to stretch it out and wiggle my toes. Within a minute the cramp was gone – A LONG MINUTE, but then suddenly I had the urge to take a nap. Yes. A nap.

I wanted to sleep on the muddy, cold, stinky trail with 27 miles logged and three to go. I wanted to just sleep. No one would have known. I could have slept for an hour and then woke up and finished the trail. The sleep would have been wonderful. I could have dreamed of delicious hot chocolate and German pancakes…. And a warm bed.

That was a foolish idea. I got up. Told my legs to basically shut up and finished the last three miles.

But I kept going. I didn’t come out to the trail to go on a hike or to fall asleep on the trail. I came out with some good friends to run The Algonquin Trail and that is what we did. In the end my watch showed 29.9 miles on the trail, but more importantly were the memories logged as we spent the morning reaching a goal.

When the trail ended there was no band at the finish line, no finishers’ medals, no ALQ 29.9 stickers, no bananas, no chocolate milk, no beer tents or picture booths…. In fact there was nothing and no one. Just me. 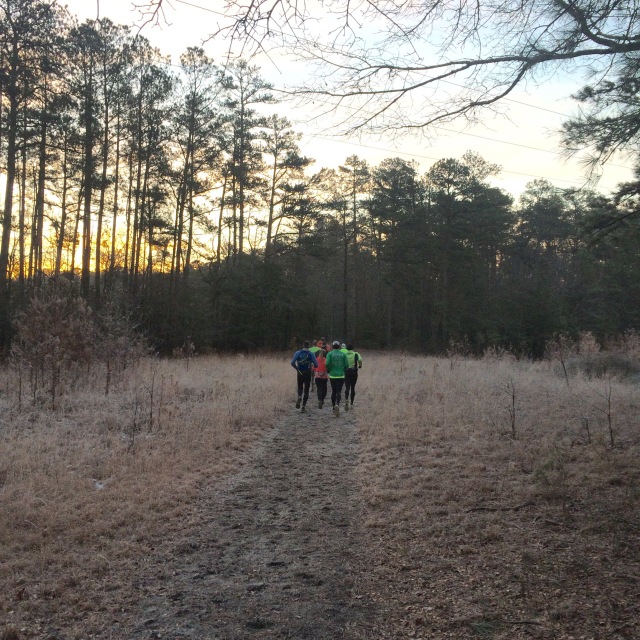 3 thoughts on “Algonquin… We finally meet”