Twenty-four hours later and I feel I am still digesting the donuts. My belly is heavy and I am a bit lightheaded. My legs are a little sore, but it is my stomach, more than anything, that is recovering from yesterday’s endurance challenge. A challenge that makes no sense at all.

Maybe I shouldn’t take days off from running because it was during a rest day a few weeks ago that I came up with this insane idea. I had a breakfast appointment for work and decided to grab some donuts from Dunkin’ Donuts. Before heading out the door for the day I was curious to see how many Dunkin’ Donuts (DDs) there were in the town of Salisbury. So I pulled up a map and saw four DDs in Salisbury and one in Fruitland… That formed a big circle… And then I thought, “Whoa! My friends and I could probably run between all of these.” So I pulled up mapmyrun.com and made a map and it added up to 25 miles. That doesn’t sound right. We need more.

We need 26.2, I thought. So, I threw in another mile and change around Salisbury University to make it a full marathon. At first I thought consuming one donut at each stop and one at the end would make for a good challenge, but then a dozen sounded even better. So the challenge was set: Run a marathon and eat at least one donut at each of the six donut stops (the first and the last is the same DD). My goal was an even dozen.

Four days before the event there were only four people committed to running the marathon, so we met at the DD near the university, ate a donut, and ran a 10k. It wasn’t too bad and I even ate a second donut and ran two extra miles. I felt heavy and a little bloated. This might be a struggle to do this I thought.

I set out my gear and prepared for the run and the donuts!

Saturday morning came early as my alarm went off at 4:30am. I wanted to be at the first DD by 5am to meet the runners and hand out the bibs. I arrived as Gabe and Michael were parking. Michael is a local photographer and an avid biker and offered to take pictures of our event. Many of the pictures in this blog were taken by him. If you want an awesome action photographer check out Michael Perry. His pictures turned out beyond epic.

Runners piled into the DD and by the time we were ready to run we had Gabe, Brian S, Mark, Jay, Jeff, Keith, Brian P, Chris, Melissa, Vanessa, and myself. Cathy was also there picking up her bib and would join us to run a little later. The rain was pouring outside and we had no other choice than to eat and go. 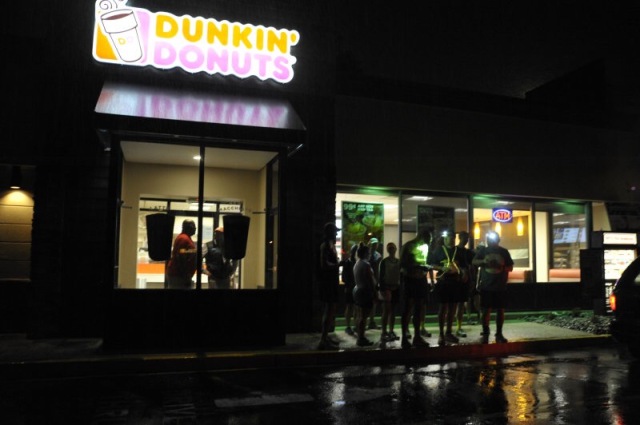 We left at around 5:45 am and we were soaked within the first few minutes. I mean head to toe soaked. The rain was relentless during the first few miles as we passed by the university and made our way towards Riverside Drive. The pace was not too fast, but faster than my comfortable marathon pace. So, I slowed down a bit and kept the lead group within sight. It was warm rain, but it was intense. No crazier way to start a marathon.

A few runners had put the course into their Garmin watches and I had the course memorized, but it was still a little tricky navigating at the start. I tried to put the complicated parts of the route at the beginning, while we were still all relatively close together, so no one would get lost. It was only 3.5 miles from the first DD to the second one in Fruitland. It is inside the Walmart and we all arrived without getting lost, mission accomplished. We had to make this our second stop because it didn’t open until 6am and who wants to start a race so late?

The second stop meant two more donuts for me. As I completed eating the donuts my bib, with the name Toasted Coconut Swanson, had two more donuts marked off. It was nice to throw in my hometown of Fruitland into the marathon even if it was just a sliver. This was a quick stop and of course as we left the sky started to dump water on us.

By mile four Chris, Vanessa and I were in the back of the pack and due to the weather and more importantly their speed we couldn’t see the rest of the group. We knew we would see them again in a few miles at Fratelli’s restaurant where a truck was left to collect our headlamps and jackets. We kept running. Fratelli’s was a welcomed last minute addition by Jay and The Swift brothers. The rain slowed down a little as we unloaded our gear. It was here that we said goodbye to Brian P.,  who had to take off to take family to the airport.

The next DD was not for another six or seven miles so we got into a groove and pushed forward. We ran down Johnson Road and across Gunby… It was then the donuts and the miles began to play tricks with my head.

“Chris! What is a piano doing in the middle of the road?”

We had a nice conversation with Vanessa about her blog and her new job. The miles flew by and we were impressed with the beauty of the roads we were running. We crossed route 50 and logged our 11th mile as we rolled into our third DD. My stomach was full, but I was up for donut #5 and #6 and knew I had no time to think about it.

It was at the third DD that Joey “Trails” DiCarlo arrived to be the pace rabbit for the lead group. He not only donated the bibs, but also brought a boost of energy to the lead group. Cathy brought the same energy and fresh legs to Chris and I. I took the time to mention a possible change in the map, which everyone thankfully rejected and we ran off towards the north end of town.

As we headed north Chris mentioned how hungry he was for real food and how donuts would not satisfy his hunger… And then it happened. Out of nowhere. Cooper, the trail fairie, arrived bringing gifts of crackers! Salty, perfect crackers. Chris felt better and ready to keep running. It was at about this point when I said to Chris, who wasn’t sure if he was running the entire marathon or not, “I understand if you don’t go all the way, but it would mean a lot to me if you finished this thing with us.” Yes, I guess I am always a salesman. But I wasn’t just selling my idea. This marathon was about running with friends and doing something crazy, fun, challenging and epic. I wanted Chris to finish it all and I knew he would. The guy loves epic.

We ran the biggest hill of the marathon on the Zion’s road bypass and headed around the mall. 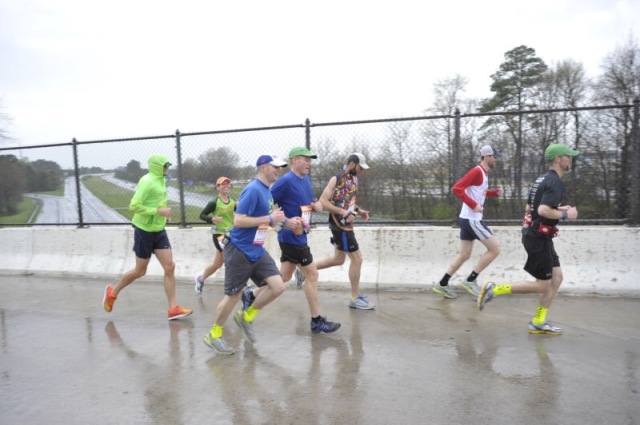 Crossing route 13 was scary and easily the most dangerous part of our run, but it also brought us to DD #4 which was only four miles from the previous one. I was hitting a donut overload, but I had to down two more and that’s all I was focused on. This time, instead of glazed, I went with two sugar donuts for #7 and #8. 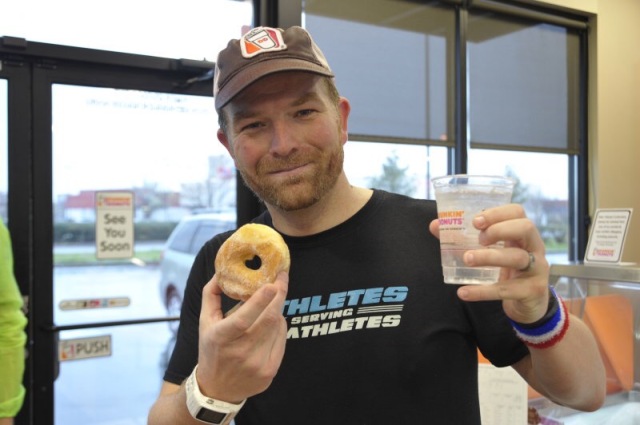 At this stop Gabe and Jeff finished their 12th donut. How many would they eat was now the question. Again when we left the DD it started to rain again. Yet this time the rain was colder as the temperature dropped into the 40s.  We ran on dirt (mud) roads for a while before running along Naylor Mill road. It was a long, dangerous, traffic-filled road that was ugly and full of holes and mud. I guess that made it more exciting, but also kept us running mostly on the grass along side the road. Michael continued to follow us and capture our adventure with his camera, but beyond that he was also a sight for sore eyes on a course that was nearly empty of spectators.

As we ran along Levin DeShiell road towards Nanticoke I had a sort of spring in my legs and opened it up a bit, if such a thing is possible with me. It was near mile 22 now and I felt alive. I love running long distances and at this point Cathy was a little bit in front of me and Chris was a little bit behind me and I was alone on the road. I loved pounding the pavement. I loved ticking off miles. I loved being exhausted… But I didn’t love having an overly full stomach. A stomach that did not look forward to two more donuts. A stomach that was wondering….

My fastest mile was running toward DD #5 on Nanticoke road. It was the last stop before the finish and we all wanted to stay and we all wanted to go. It was a tough stop, but an awesome one. Just three more miles to go. We took a quick picture with the DD staff, who thought we were crazy, and and I “fueled” up. 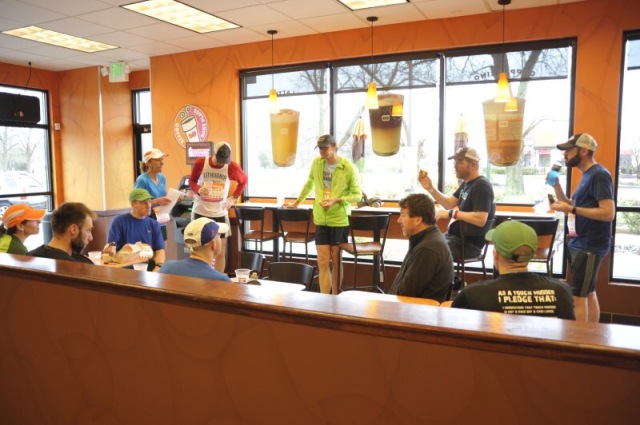 I grabbed two old fashion donuts and ate one. I drank a little bit of a Powerade and then took the other donut in hand as we started to run back. The idea originally was to run with the donuts, but the rain made it a better idea to eat them at the DDs and then run. The last part of the route ran through downtown Salisbury.

Downtown Salisbury is beautiful and historical, making it a wonderful place to run. We ran straight down Main Street and past the hospital.

I was trying to stay with the lead group this time, but they were just too fast. I stayed steady and ran up Waverly road. It was then that I saw my van with my wife and three kids! They were all cheering me on and I was excited to see them… Excited until my wife slowed down and pulled out a dozen donuts and offered me one. I had to laugh, but I wanted to hurl. Get those away from me.

The last mile felt great. I ran strong and was excited to finish, then I realized I still had two more donuts to eat. 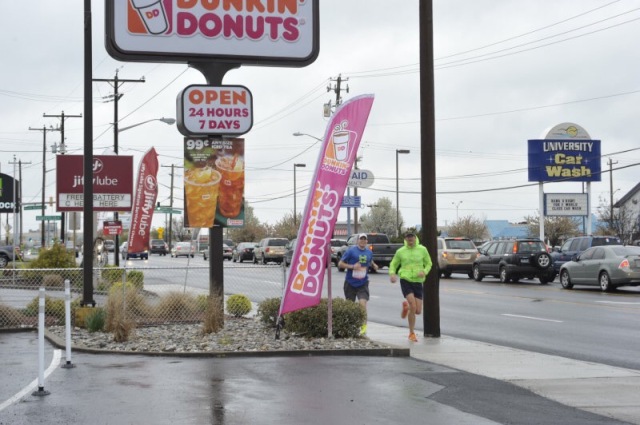 Completing a marathon with ten donuts in your belly is no small task and eating two more right after is not fun either. Before sitting down I grabbed two more: an old fashion donut and my bib name, a toasted coconut donut. It looks like I saved the best for last. The Toasted Coconut Donut was amazing, just like this day running and eating with friends. A dozen donuts with a dozen friends over a little over two dozen miles. What an adventure!

My dozen donut-eating friends (Melissa, Vanessa, Cathy, Jeff, Gabe, Chris, Brian P., Brian S., Mark, Jay, Keith, and Joey) and I ran a total of 276.6 miles and ate 111 donuts! I consumed 3,400 calories in donuts and burned 4,378 calories running. And in case you are wondering, Gabe and Jeff finished having eaten the most donuts at 14 each.

And now I just want an apple and a celery stick.

One thought on “DONUT attempt this marathon on your own ”