spring out of bed and went down to eat breakfast. Half a bagel and a banana later we were jumping in the van. On the way up to Whitetop I drank some Gatorade and had a few Good and Plentys that I think Gabe’s has left there months ago.

The race started at 7am and so when we arrived at 6:15 we had some time to spare. It was in the low 40’s but wearing extra clothes would be a pain for later in the race, so we just suffered for a while. We used the restroom and then waited.

6:55am Jason announces to all the racers to get ready at the start. He said a quick one or two minute speech and they said “go”. No count down or loud announcement, just simple get out of here.

Fresh legs at the beginning of a race is normal and it takes a lot to slow down at the beginning of a race. I ran with Gabe and Jordan down the hill. We passed Green Cove at mile 3.4 and Creek Junction at mile 6.7 talking and laughing and meeting a bunch of members of The Yeti Army. It was about this time that someone told us it was wise to walk the trestles and run in between. I like that since there was not a lot of elevation gain, less than 4000’ total.

I felt strong and felt like I could run forever. I was wrong. 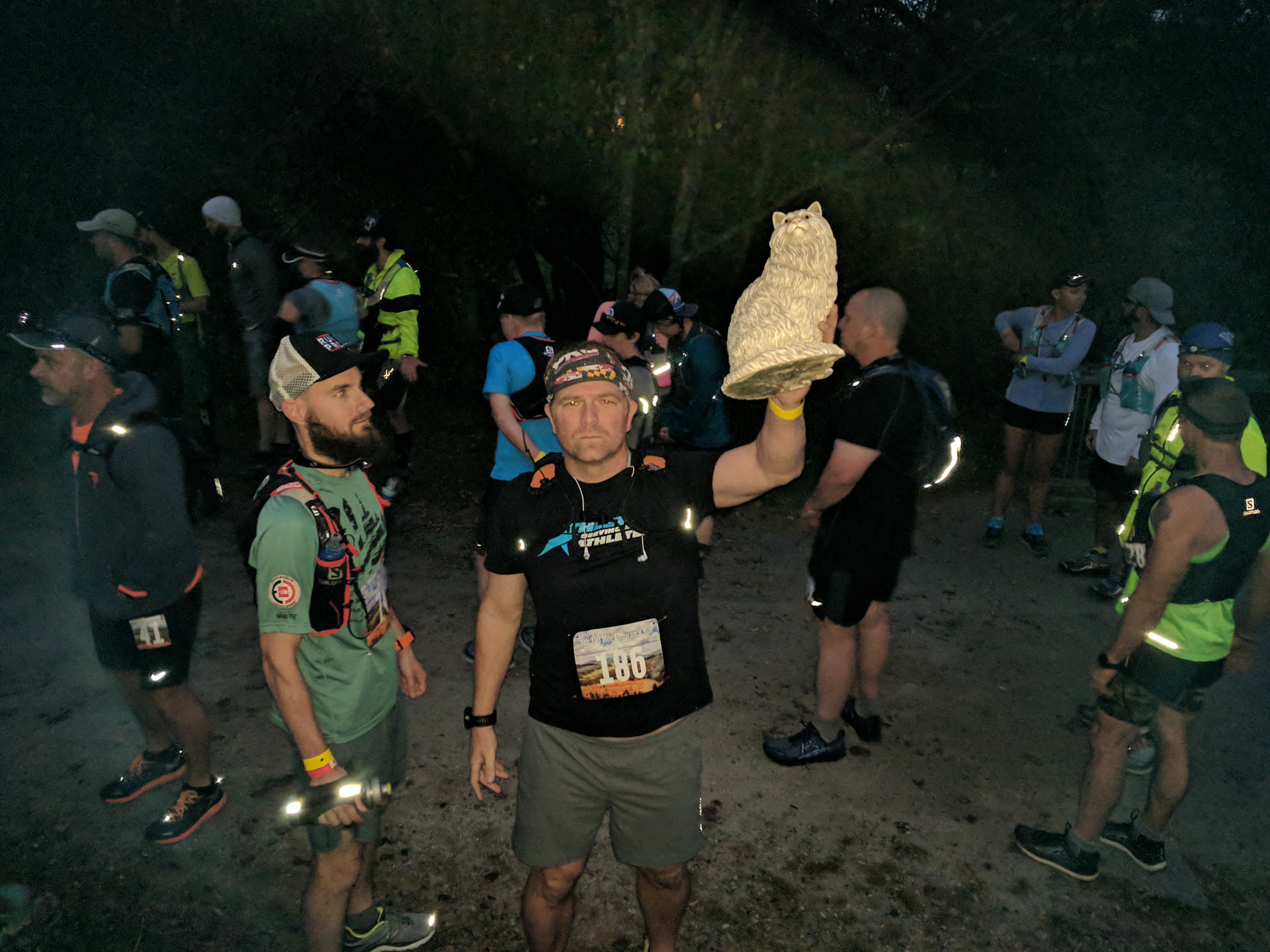 Damascus, take one, at mile 17.9 was a quick run through. It is an aid station, but since Jeff was meeting me at nearly all the stops I didn’t feel the need to stop in. At some point between Damascus and Alvarado at mile 24.9 Gabe and Jordan passed me like two happy-go-lucky friends enjoying a Saturday fun run. I was still feeling good. My legs were cranking out miles and the scenery was amazing.

The first checkpoint cutoff was at mile 33.4 at The Abingdon aid station, which would also be the finish line of the race. It was an out and back and back out course. The cutoff for Abingdon was nine hours and I arrived 2:30pm or an hour and a half before the cutoff. I felt great. Jeff have me some sort of highly caffeinated drink and some more cliff meals and I was off. My legs were feeling some wear and tear and my legs were dirty and bloody, but overall I️ was solid.

My second trip through Alvarado was a quick in and out. The thing I️ started to crave at this point was more fruits. The peaches and apricots were calling my name… actually with 41.9 miles logged everything started to call my name. My legs weren’t just calling me they were yelling at me. My legs pretty much hated me by now, but i was loving the race and the suffering was tolerable. 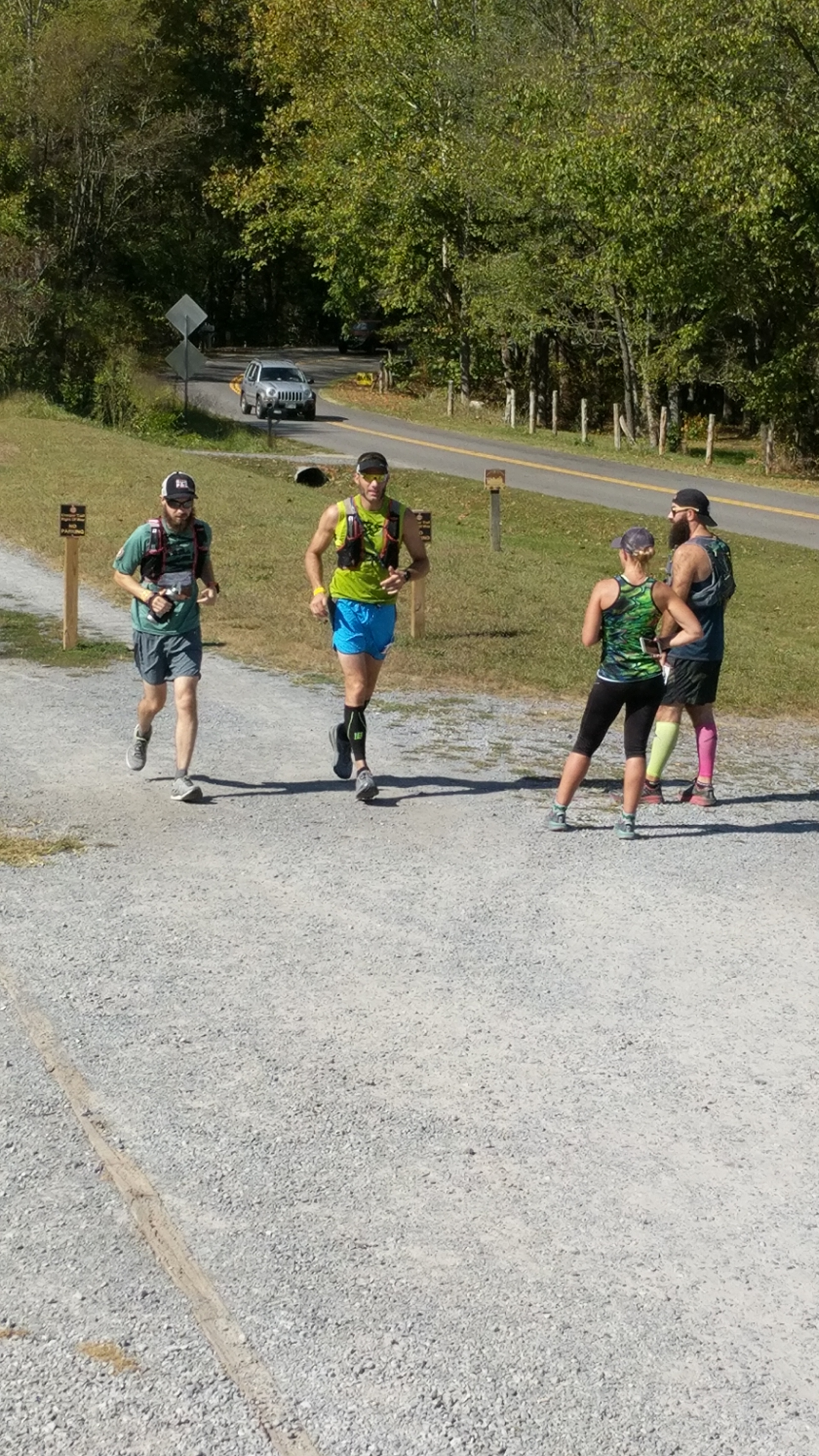 At the halfway point of the race I was still moving a decent pace. I️ finished the first half in just over 12 hours and someone told me i could maybe break 24 hours… I️ replied “29:59 is my goal.” Leaving Damascus the second time I asked Jeff where my headlamp was, since I thought it might get dark in a few hours. He said it was in the van and so I told him not to worry and I would get it from him at the next aid station. That was a bad idea. The first of a handful of bad ideas. It didn’t take hours to get dark. It took about 15 or 20 minutes. Things went dark quickly both literally and figuratively. All of a sudden by mile 52 I was running the trails in nearly total darkness. The trail was wide enough and not terribly technical, so it wasn’t too dangerous but it slowed me down significantly. I must have run a few hours in the dark before finding Jeff at mile 56 at the Taylor Valley aid station.

Those dark hours began to suck the life out of me but I continued uphill toward Whitetop. It was quite and peaceful and i was ecstatic to have my headlamp glowing and pushing me forward. All those flat miles on Delmarva did nothing to help me climb toward Whitetop.

At 1:15am I arrived at Whitetop 45 minutes before the cutoff. I was depleted. I thought there was no way to return back to Damascus before the 8am cutoff. I wanted to throw in the towel. We all have a breaking point and after 66.8 miles on the trail I thought I might be done. Well, my body thought I was done. My mind was still fired up. So there was a conflict.

I pounded on the van window. Jeff woke up and rolled down the window. “I might call it quits here,” I️ said, expecting Jeff to talk me out of it. “Well you did a great job,” Jeff said half asleep. He then proceeded to tell me how he has a flat tire and has to fix it in between aid stations. I then told him that I think I better check in with the aid station and decide from there. He suggested not making a decision before getting some food in my body.

My mind and body were both pretty jacked by now.

“What if I throw in the towel right here?,” I asked the aid station volunteers.

“We would take you to The Damascus aid statin where you can relax in a warm chair,” the aid station lady said.